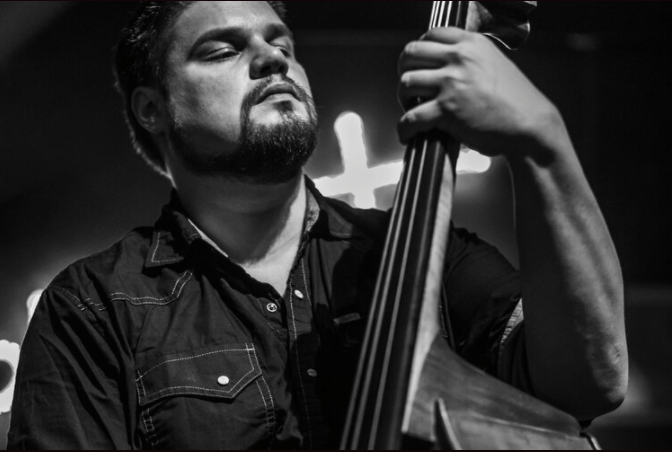 VIRTUAL EVENT LINK
Marcos Varela, a equally skilled doubler at both acoustic and electric bass is among the highly respected bassist/musicians in the American and International Jazz/music scene. His talents have also earned him many awards and accolades as musician, composer, producer, band leader, and teacher.

In his hometown of Houston, Texas, Varela attended the renowned High School for the Performing & Visual Arts. As a professional musician, he continues to be very active in the New York jazz and contemporary music scene and has made a name for himself as one of the most in-demand bassists in the City and worldwide. He regularly performs with a wide variety of ensembles and band leaders including; The Mingus Big Band, John Holiday, George Cables, Ingrid Jensen, ‪Billy Hart‬, Antoine Roney, Charli Persip, ‪Clifton Anderson‬, ‪Jason Moran‬, ‪Geri Allen‬, ‪The Last Poets‬, ‪Leslie Odom, Jr‬., Frank Lacy’s Vibe Tribe, ‪Kendrick Scott‬, ‪Billy Harper‬, ‪Tyshawn Sorey‬, Bob Mover and Vincent Gardner’s Jazz Houston, among countless others. He was selected as a member of ‪Jazz at Lincoln Center‬ Trombonist Vincent Gardner's Jazz Houston, which has featured guests such as ‪Gregory Porter‬, ‪Wynton Marsalis‬, ‪Ruben Blades‬ and‪ Jon Faddis‬‬. As a composer, He has also composed music for several film and television projects, including director Domenica Cameron-Scorsese's film "Roots in Water."

Legendary bassist ‪Ron Carter‬ contributed to the liner notes for Marcos's Origin Records debut album "San Ygnacio'', where Carter writes that Varela's "Tone, Choice of Notes and Compositions will place his playing and name on the list of bassists to be heard.", in addition Mr. Carter has made statements regarding Marcos’ musical contributions saying of him; “a valuable asset to any musical organization”, “a truly unique musician”, “Mr. Varela belongs in the top bass players in the industry and his impressive resume confirms my words”, “a fine example of talent that is essential to the scene”, “top notch proficiency on his instrument as well as a complete understanding of the history and details of the jazz art form”

In addition to sideman work, Varela leads his own projects. This includes a European tour which featured a performance of the music of his debut album “San Ygnacio” on origin records at the historic Jazz á Liège festival in Liege, Belgium. This project (Marcos Varela featuring Billy Hart)‬ shared a billing with Fred Hersch‬'s Trio at the festival. He also recently lead a all star quartet at Prishtina’s Jazz Week in Kosovo, in March of 2020. Varela’s newest projects include “One Mind” recently released on the Spanish label Fresh Sound Records, with pianist Peter Zak, as well as Seamus Blake and Billy Drummond. Another project on the same label, “Illumination” featuring Rob Garcia, Marcos Varela, John O’Gallagher, and ‪Noah Preminger,‬ was the most recent release on December 15th, 2020.

Lex Korten on piano, has had ample opportunity to learn from some of the finest and most dedicated mentors in Jazz music. To help represent America’s great original art form, a music with social purpose and irrevocable partnership with African-American heritage, is a privilege and responsibility Lex strives to fulfill every day. He has been fortunate enough to perform worldwide in service of this message and the betterment of his craft. Lex is proud to collaborate with many like-minded individuals in his generation and an ever-expanding list of great luminaries, and he leads new projects regularly at The Jazz Gallery in NYC. His playing has been called upon by greats including Tyshawn Sorey, Jaleel Shaw, Caroline Davis, Ari Hoenig, Dayna Stephens, Robert Hurst, Clarence Penn, Joel Ross and Massimo Biolcati. Recently, Lex won 1st prize in the 2020 UNISA International Jazz Piano Competition, held in South Africa.

Mark Whitfield Jr on drums was introduced into the world of music by his father, guitarist Mark Whitfield, who could tell from an early age Mark Jr was a drummer in the making. Quickly, Mark Jr progressed from air-drums in his walker to sitting in on his father's gigs. After graduating from Berklee College of Music, in the spring of 2011, Mark moved back to the NYC area, joined Myron Walden’s Momentum and played around the New York jazz scene. In February 2013, Mark had the pleasure of recording with Kenny Garrett on his Grammy nominated album, PUSHING THE WORLD AWAY. While still playing with Myron, and subbing with countless other names in the jazz world, Mark filled in on a gig with Sean Jones in the Summer of 2014. After about a year Mark joined Sean Jones’ band and has also been fortunate enough to play with the likes of Orrin Evans, Christian Scott, Wallace Roney, Kurt Rosenwinkel, Aaron Goldberg, Tia Fuller and Charnett Moffett. In 2016, Mark and his family released their first album as a family entitled GRACE (Whitfield Family Band) and also was a part of Sean Jones’ Mack Avenue release LIVE FROM JAZZ AT THE BISTRO. Mark still plays in NYC from time to time, mainly at the Fat Cat , Smoke Jazz Club or Smalls Jazz Club, with the likes of Frank Lacy, Theo Hill, Stacy Dillard and David Bryant, while still traveling around the world and USA with Sean Jones, Mark Whitfield, Brian Jackson, Black Art Jazz Collective, Tia Fuller, Kurt Rosenwinkel, Orrin Evans, Chico Freeman, Charnett Moffett and other names in jazz . Mark is a endorser of Canopus drums and Meinl cymbals.