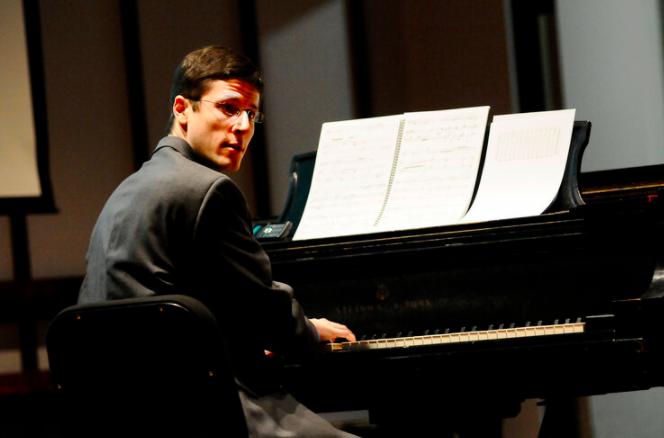 VIRTUAL EVENT LINK
Composer and pianist Jonathan Howard Katz is gaining increasing recognition for the unique immediacy and expressive depth of his music, which speaks to audiences and performers alike. Harnessing his intuitive grasp of communication, combined with a rigorous technical command, he has developed a strong artistic voice that is recognizable through a diverse body of work.

Current projects include multiple song cycles and other works for voice; a new commission for violinist Emily Popham Gillins; and a cycle of 24 solo piano works, each written for a different choreographer. The latter was conceived during the pandemic as a way to connect through quarantine, and will comprise about two hours of music.

Dr. Katz’s music has been performed by the Mivos Quartet, Da Capo Chamber Players, Periapsis Music and Dance, Ensemble Pi, and many others. His music has been heard at venues such as Symphony Space, Jacob’s Pillow, Bargemusic, Merkin Hall, the Kozciuszko Foundation, and Roulette. He’s a recipient of the Robert Helps Prize and a Javits Fellowship; commissions and other support have come from Concert Artists Guild, New Music USA, the Charles and Joan Gross Family Foundation, and numerous individuals.

One of Dr. Katz’s major artistic interests has been developing close collaborations with dance artists, and to date he has worked with dozens of choreographers, including Seán Curran, Manuel Vignoulle, Kate Skarpetowska, Da’ Von Doane, and Erin Dillon. He is the artistic director and cofounder of Periapsis Music and Dance and served as adjunct faculty at NYU Tisch Dance.

Before the pandemic, Emily was busy subbing with the New York Philharmonic, recording film soundtracks, and performing with the Alcott Trio. This season she has enjoyed playing for healthcare workers at Bellevue Hospital, learning bucket list solo repertoire, and teaching her two young children at home. Originally from Louisville, Kentucky, Emily studied at the University of Indiana, the Juilliard School, and Manhattan School of Music. She has been a member of Ensemble Connect, Sejong Soloists, and the New York Chamber Soloists.