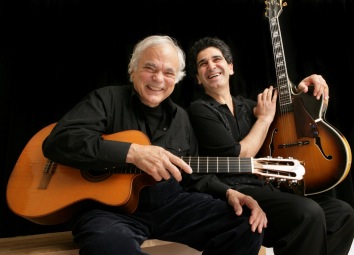 A prolific and popular studio musician, Gene Bertoncini honed his professional chops as a member of the Tonight Show band during Johnny Carson's tenure, and has worked with composers and arrangers such as Lalo Schifrin and Michael Legrand and has performed with the Metropolitan Opera Orchestra. Mr. Bertoncini has been heard with an extraordinary range of jazz greats, including performances and recordings with Benny Goodman, Buddy Rich, Wayne Shorter, Hubert Laws, Paul Desmond among others, as well as such distinguished singers as Tony Bennett, Lena Horne, Nancy Wilson, Vic Damone, and Eydie Gorme. In addition to an active performing and recording schedule, Gene teaches at the Eastman School of Music and William Patterson University . A New York City native, he graduated from the University of Notre Dame with a degree in architecture. According to the New Yorker magazine, "Bertoncini is an affecting, highly original guitarist that moves easily back and forth between classical and jazz guitar."Gene was just nominated as the best jazz guitarist of the year (09) by the New York Jazz Press Association.

Along with being a prodigious player, composer, arranger and bandleader, Roni Ben-Hur has truly dedicated himself to educating others about the joys and rewards of playing jazz and, in turn, has done as much to generate a new audience, and new players, for this music as anyone on the scene. Since being the jazz program founder/director at The Lucy Moses School at Kaufman Center in Manhattan, Roni has literally taught thousands of people through his jazz ensembles and workshops. He is also responsible, in collaboration with Santi Debriano, for creating a very successful week long jazz camp in the village of Saint Cezaire in Cote d’Azure, France. With Nilson Matta, he created the Jazz and Brazilian Camp in Bar Harbor, Maine. Both camps offers adult jazz amateurs an opportunity to learn jazz and Latin music, while living and interacting with the community, and has become a major attraction in their region. Ben-Hur was also on the faculty of the jazz camps in Stanford, Litchfield, and the National Guitar Workshops. His book, Talk Jazz, is much sought after by fellow musicians and students worldwide. For Ben-Hur, jazz is not only a calling, it is a life force. With his wife, Amy London (Motéma recording artist, jazz vocalist and professor of vocal studies at The New School), and their two daughters, Roni Ben-Hur reside in the “jazz town” of the tri-state area, Teaneck, New Jersey.