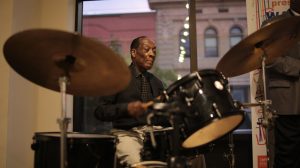 Drummer Billy Kaye is well known for his nearly 70-year career, during which he has played with greats including Thelonious Monk, George Benson, Dinah Washington, Freddie Redd, Gloria Lynne, Jimmy Smith and Sun Ra. He held the drum chair in Lou Donaldson's band for 20 years, and appeared on the Stanley Turrentine hit "Sugar". June 7, 2018 was dubbed "Billy Kaye Day" by local leaders in Wilson, North Carolina, in recognition of his returning to his hometown to perform.