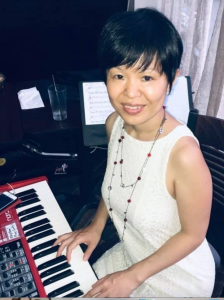 Born in Kagoshima, Japan, Kiyoko Layne played classical piano and alto saxophone in her youth and later formed an acapella band while working as a nurse. She began singing to her patients and was overwhelmed by their reaction. When she saw them crying she realized the great power music has to move people’s hearts. Leaving her nursing career to pursue her passion for music, she joined the well-known Japanese Gospel Choir the “Naniwa Black Peppers” in 2000, and then, inspired by the choir director to study Jazz and Gospel in the U.S., she attended Berklee College of Music, where she earned a degree in Jazz Composition in December of 2007. Since moving to Harlem in 2008, Kiyoko has performed in numerous jazz clubs, in the house band at the Jazz Foundation of America's Monday Night Jam, and at United Nations Plaza, while also working as music librarian for the Duke Ellington Orchestra and teaching. Her first CD, "Kiyoko in Harlem", came out in 2009.