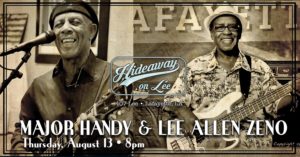 Two absolute living legends will take the stage at Hideaway, bringing us a great night of Rhythm and Blues. Major Handy Born And Raised In The Heart Of Creole Country In Rural South Louisiana, Major Handy Has Been Generously Serving Up His Own Original Recipe For Hot! Blues, Zydeco And R&B To Audiences Around The World For Over 5 Decades! Originally Revered As The Indispensable Sideman For Zydeco Legends 'Good Rockin' Dopsie' And 'Buckwheat Zydeco', Major Handy's Versatility And Reputation As A True Louisiana Treasure Has Catapulted His Act To The Stages Of The Top Music Festivals In The World. Lee Allen Zeno grew up immersed in the Louisiana music scene. Having demonstrated a natural ability to cross the genres of blues, zydeco, gospel, country and soul music, Lee Allen became an in-demand bass player while still in his teens.

While not on tour with Buckwheat Zydeco, Lee can be found at various clubs, from Lafayette to New Orleans, laying down grooves with Roddie Romero, Rockin’ Dopsie Jr., Major Handy, Zydeco Ray & the Creole Knight Riders, Lil’ Buck Sinegal, Henry Gray & Carol Fran, as well as the Rue Boogaloo band, with Marty Christian.