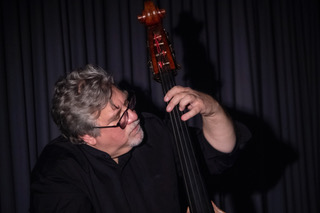 VIRTUAL EVENT LINK
Michael Formanek has been described as “a bold and unclassifiable bassist and composer,” while The New York Times has noted that his music is always “graceful in its subversions, often even sumptuous.” Whether it’s for a small band or a large ensemble, he creates modern jazz that is earthy yet atmospheric, always alive with dark-hued melody and bone-deep rhythms, rich in dynamic possibility and the sound of surprise. Even with decades of experience to his credit – he got his start as a Bay Area teenager playing with the likes of Joe Henderson and Tony Williams – Formanek has made some of his keenest creative leaps in recent years, documented on a sequence of justly lauded recordings. His three ECM albums as a leader each scored rare 4ive-star reviews in DownBeat. These included two discs – Small Places (2012) and The Rub and Spare Change (2010) – featuring a powerhouse quartet with saxophonist Tim Berne, pianist Craig Taborn and drummer Gerald Cleaver; the third was a magni4icent record – The Distance (2016) – that showcased his compositions for an all-star big band, playfully dubbed Ensemble Kolossus. Formanek’s 4irst album for the Intakt label, Time Like This (2018), saw him leading his new Elusion Quartet with saxophonist Tony Malaby, pianist Kris Davis and drummer/vibraphonist Ches Smith to “soul-stirring” effect, according to All About Jazz. Formanek’s latest release – due from Intakt in October 2019 – is Even Better, which presents for the 4irst time his Very Practical Trio, featuring the altoist Berne and guitar luminary Mary Halvorson.

Born in San Francisco in 1958, Formanek has performed in myriad contexts over the decades, including with masters from Gerry Mulligan and Stan Getz to Freddie Hubbard and Fred Hersch. Among his peers, the bassist has collaborated closely with Tim Berne, making a duo album with the saxophonist (Ornery People) and performing extensively in Berne’s iconic Bloodcount band in the ’90s. Formanek also released a solo LP – Am I Bothering You? – via Berne’s Screwgun label in 1998. Thumbscrew, a collaborative trio featuring Formanek and Halvorson alongside drummer Tomas Fujiwara, has released four lauded albums via Cuneiform. Formanek’s early recordings as a leader included a string of quartet and septet releases for Enja from 1990 to 1996. As a sideman, he has recorded with Uri Caine, Dave Burrell, Jane Ira Bloom, Gary Thomas, Jack Walrath, Harold Danko, Lee Konitz, Freddie Redd, Art Pepper, Chet Baker and even Elvis Costello, along with appearing on albums by such frequent partners as Berne, Halvorson, Fujiwara, Malaby, multi-reedist Marty Ehrlich, trumpeter Dave Ballou, saxophonist Ellery Eskelin, drummer Devin Gray and pianist Angelica Sanchez. From 2001 to 2018, Formanek taught jazz bass and jazz history at the Peabody Institute of Johns Hopkins University in Baltimore, where he also directed the Peabody Jazz Orchestra. He continues to teach at the School for Improvisational Music in New York, along with conducting workshops and masterclasses internationally.