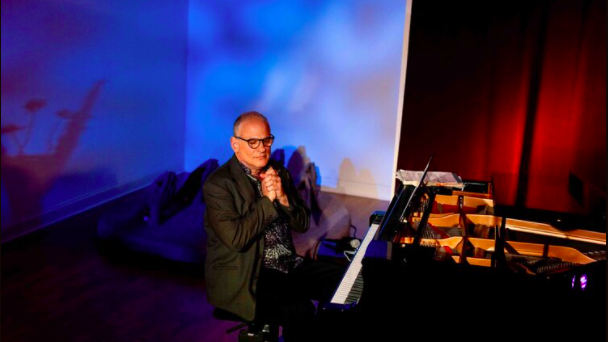 VIRTUAL EVENT LINK
Three-time Emmy-nominated pianist/composer Steve Sandberg is a musical shapeshifter, remixing classical music, world music and jazz with the excitement of virtuosic improvisation. A long time pupil of Seymour Bernstein, he leads the Steve Sandberg Quartet, whose concerts combine performances of Chopin, Ravel, Bartok, Debussy, and Liszt with improvisations on Mr. Sandberg’s original compositions that are based on these pieces and also draw from Latin, African, Balkan, jazz and East Indian traditions.

One audience member describes the experience as listening to “music from a country I’ve never been to but always wanted to visit.” Sandberg also uses the concerts as an opportunity to educate and engage his audiences with accessible commentary that draws them into his musical world.

He was also composer and musical director for Nickelodeon’s landmark children’s programs “Dora the Explorer” and “Go, Diego, Go!”. His scoring and songwriting was informed by his lifetime immersion in the music of many cultures. Tonight he will perform compositions from the classical repertoire alternating with his trio’s interpretations of his own works.

Michael O’Brien Bass
Bassist Michael O’Brien has performed and composed internationally for over a decade with such notables as Harry Connick Jr., Dave Samuels, Ruben Blades, Gene Pitney and many others.  He has been the bassist of the Steve Sandberg Quartet since its debut in 2016.