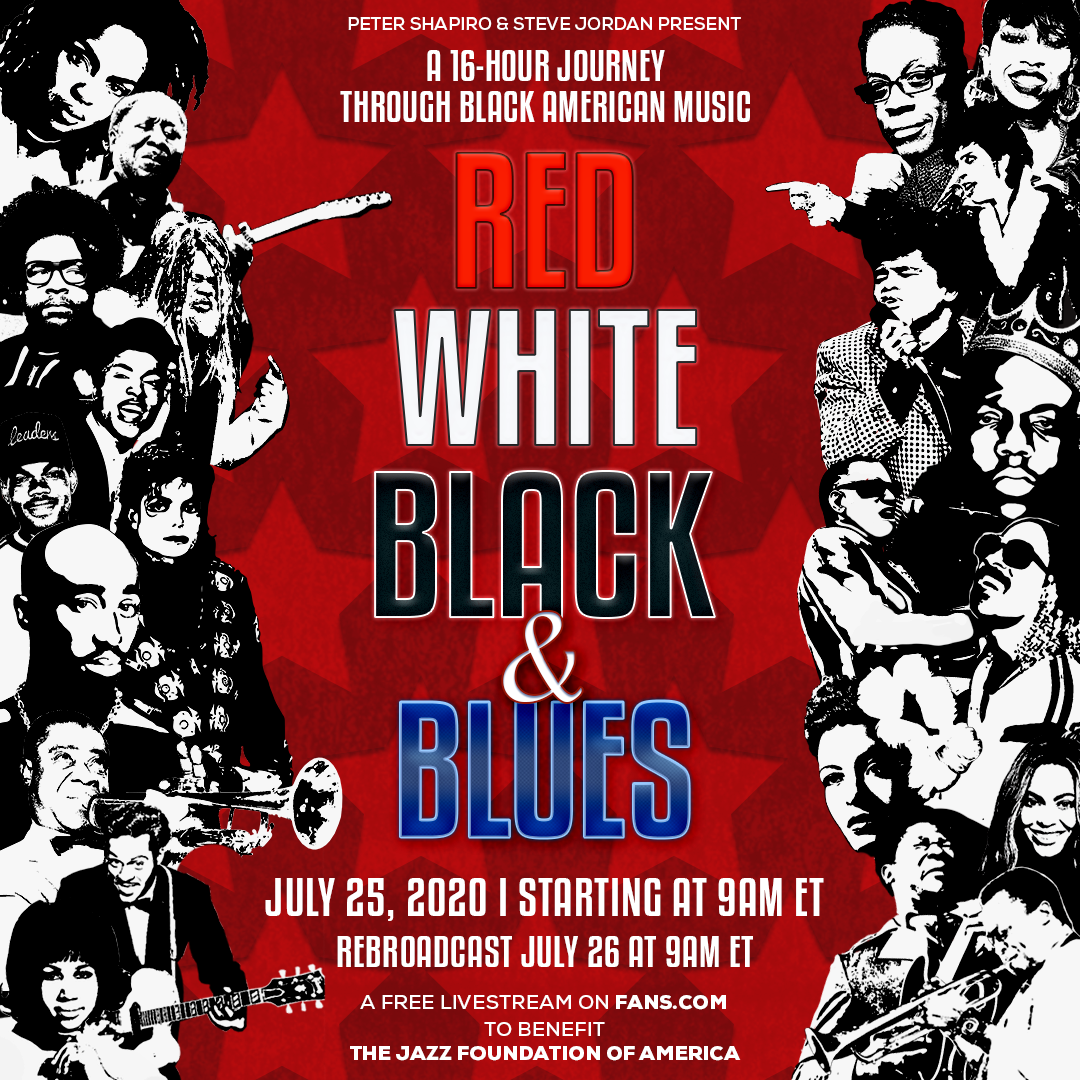 AUDIO AND VISUAL REVIEW OF CLASSIC MOMENTS IN BLACK AMERICAN MUSIC TO BE STREAMED FREE ON FANS.COM ON SATURDAY, JULY 25, BEGINNING AT 9AM & REBROADCAST SUNDAY AT 9AM,

“The best way to show something is to show it. We thought the best way to showcase the unmatched influence that Black performers have on music that defines America and the American identity was to actually show it. So, we edited 16 hours of video together, featuring the most amazing live performances by Black American artists over the past 90 years. It’s a very powerful thing to watch, and it becomes quite clear quickly that the story of popular music in America is driven by the story of Black music.”

This stream will collect donations for Jazz Foundation of America, a non-profit organization based out of New York City. For 31 years, Jazz Foundation of America has been keeping jazz, blues, roots, and R&B alive by helping the musicians who have played the soundtrack to our lives. Their social work services provide housing assistance, pro bono medical care, disaster relief, and emergency financial support to musicians and their families in times of crisis. Through their Jazz and Blues in the Schools and Gig Fund performance programs, the foundation creates meaningful employment for hundreds of musicians every month and brings free concerts to thousands of underserved audience members across the country. In the past year, Jazz Foundation of America has assisted in more than 8,000 cases nationwide, including those supported by our COVID-19 Musicians’ Emergency Fund, which was established during the pandemic to help musicians and families with basic living expenses. Whatever the need is, they don’t only fix the problem, they heal it with love.

This stream will be broadcast on FANS.com on Saturday July 25 starting at 9:00AM ET. A replay of the event will commence on Sunday, July 26 at 9:00AM ET.

About Dayglo/FANS: Dayglo Presents: A leading live entertainment and media company created by entertainment entrepreneur Peter Shapiro. Over the last two decades, Shapiro has created unique entertainment experiences across film, live music, publishing, and hospitality, all while using Dayglo Presents to infuse each project with passion and respect for consumers. Building on Dayglo Presents’ success of The Relix Channel livestreaming platform, Shapiro, has reinvigorated FANS. In an effort to continue growing the company’s broadcast offerings, Shapiro and FANS have developed an immersive, livestreaming platform changing the way music is created, shared and experienced, no matter where it finds you. FANS enables advanced communication within livestreams so users can do more than view including being in the stream alongside viewers around the globe. With a commitment to keeping live music enthusiasts connected during these unprecedented times, the site will stream live concerts and video programming from The Capitol Theatre, Brooklyn Bowl Williamsburg, Nashville, and Las Vegas, Garcia’s, LOCKN’ Festival, as well as from fellow venues/festivals.

FANS on the web:

The Jazz Foundation of America on the web:

Share
←  NewerSAVAGE TICKETS TO LAUNCH THE “HOW I FELL IN LOVE WITH JAZZ” CONTEST
Older  →LIVESTREAM from Tel Aviv: Guy Mintus Trio